Since 1983, Zachary’s has been making award-winning pizza in the San Francisco Bay Area. When Zachary’s founders, Zach Zachowski and Barbara Gabel, decided to retire, they sold the company to the employees via an Employee Stock Ownership Plan (ESOP). In 2010, Zachary’s became 100% employee owned.

Our employee owners are the mojo behind the madness. They make each of our restaurants unique, fun, and delicious. This month, we are turning our attention to Antonio and Adanely Beltran, a father/daughter duo who both work at our San Ramon location!

Christina (C): What are your hire dates? 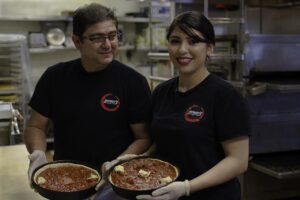 C: Okay, so you (Antonio) had already been here for nine and a half years before Adanely started?

AN: Hawaiian with bacon and jalapenos, thin crust

AD: Whatever he makes! [Looks at Antonio, Laughs]

AD: And he adds some spices that he brings from home.

C: Oh! What are the spices? Or, is it your secret recipe?

AN: I just do chicken, mixed cheese (Monterey Jack and cheddar), tomatoes on top, and green onions

AN: Red onions, and ranch… [Makes motion of swirling the ranch on top of the pizza]

C: Sound good. And where are you both living right now? What city?

AD and AN: Tracy

C: Do you live together?

C: Great. [To Antonio] How did you discover Zachary’s?

C: He interviewed you? Do you remember what he asked you?

C: You started on the same day that he interviewed you?

AN: Yes! There were too many people!

AN: Yeah… crazy. There were too many people! Crazy… Almost twelve years ago…

C: Did you start right when we opened?

AN: Two weeks after. 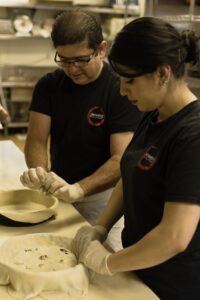 AN: [Makes huge eyes]  Very hard! Crazy! You know, I had never made pizzas. This was my first time, so it was very hard for me. The pan pizzas… my hands hurt. Oh my God… it was painful. Too many nights… In the night time, for a month, I had a lot of pain. [Motions to his hands aching].

AN: Yeah! Look at that! [Motions to his arms]

C: That’s pretty cool! Why did you think that this would be a good job for Adanely?

AN: Because of professionalism, the environment, there was no bullying. And there was a lot of respect between people. Especially compared to other places, it’s very respectful among coworkers. Also because we were going to be working together. I had been working a lot of years for a long time and I was away from home. I liked the fact that we were going to be together, working.

AD: It’s fun. Uh, he helped me a lot when I first started. He told me what to do and guided me on the right track. We get to spend our breaks together sometimes, so he makes me food. Like he said, we didn’t get to spend a lot of time with him when he was working both of his jobs. Here and his other other job. So, we were spending more time together.

C: Do you have other siblings?

C: [To Antonio] Would you want to work with them too?

AN: Are you kidding? Yeah, why not? Yeah, she (the younger sister) started another job as a busser. Two days, Saturday and Sunday…

C: Is there anything that is challenging about working together?

AN: Ah no. We are in different positions so we if we do something wrong, we have to take responsibility for it.

AD: Yes, like he takes his responsibility, I take mine. We’ve never had a moment.

C: It seems really cool to spend a lot of time together, but then if there were any conflict or drama outside of work, I can imagine, for me, that would carry over.

C: Do you talk about work when you are at home?

C: You keep it separate?

C: (To Antonio) What is your favorite thing about working at Zachary’s and/or working with Adanely? 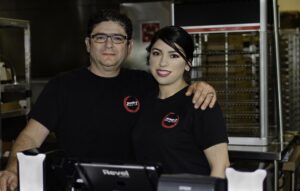 AN: Everything for me. I like everything. That’s why I’ve been here for so many years. A lot of places have people for only two or three years and then they move on.  There are a lot of things… the managers, the people, it’s very different (than other restaurants). And the money! [Laughter]

C: You gotta make the money!

C: [To Adanely] What’s your favorite thing about working here?

AD: It’s very team oriented. So, if you are having trouble with something, especially serving, there is someone right there to help you all the time. We try to make it as least stressful as possible. Helping your coworkers out too… You help them and they help you. Um… everybody gets along. The managers are pretty cool. [Laughter] I talk to everybody, even in the kitchen. It’s just very friendly.

C: Do you all cook at home together?

C: Do you (Antonio) do most of the cooking?

C: What are your favorite things to make?

AD: He cooks everything!

AD: I think steaks is what he makes the most.

C: [To Adanely] What is your favorite thing that he makes? Other than that pizza?

AD: Everything that he makes is so good. It’s delicious.

AD: We always have friends over and they are like, “Oh yum.”

C: Your house is a gathering space for people?

C: Because you are producing all of that delicious food!

C: What do you all do for fun outside of Zachary’s?

AN: For fun? [Laughter] When we take vacations, we try to go places. To Magic Mountain and Las Vegas! But the days that we have off, we have dinner at home and try to get together. We always try to eat together.

C: With your whole family?

AN: We don’t know because Adanely is in school.

AD: Yeah, I’m in school and I have a career in mind, so we don’t know. But it would be nice to work together all the 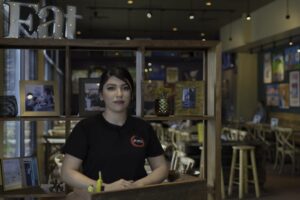 AD: Yeah. We just have a good time together. We never argue. But, he’s going to stay here until who knows… but I’m going to school, so I don’t know what the future is.

C: What are you going to school for?

C: What kind of nursing do you want to do?

C: Fun. [To Antonio] So you are not interested in nursing?

C: Great. I think that’s all of my questions. Do you want to say anything else about working together? Or working at Zachary’s?

AN: I am very thankful because these past eight years, we were in a very difficult situation together. But this job keeps us together.

AN: Thank you, thank you. And many thanks to Kevin and Leandra (Leandra is Zachary’s Vice President and General Manager).

C: Was he different?

AN: No, he was the same. He is always a friendly person. He always says hi. A lot of people get nervous around him, but I think he is a friendly guy. I think because we are the same age, it’s a different type of vibe.

C: You can relate to each other.

AN: And I’m thankful that he gave me this job.

C: Do you have any pictures of yourselves when you were younger cooking together?

AD: My mom took pictures of him cooking… but not us together. I don’t know. I’ll see.  She’s gonna be like… she never cooks.

C: [To Adanely] You never cook?

AD: No, he always cooks. Laughs.

C: What do you do when he is not there?

C: What are you going to do if you’re living along?

AD: I’ll just take him with me.

C: Awww, that’s pretty sweet that she wants to take you with her wherever she goes.

AN: When she gets married, she will learn. [Laughs]