Since 1983, Zachary’s has been making award-winning pizza in the San Francisco Bay Area. When Zachary’s founders, Zach Zachowski and Barbara Gabel decided to retire, they sold the company to the employees via an Employee Stock Ownership Plan (ESOP). In 2010, Zachary’s became 100% employee owned.

Our employee owners are the mojo behind the madness. They make each of our restaurants unique, fun, and delicious. In honor of Women’s History Month and International Women’s Day (March 8th!) we are turning our employee owner spotlight on TSERING SANGMO, the first woman to work in a Zachary’s kitchen! 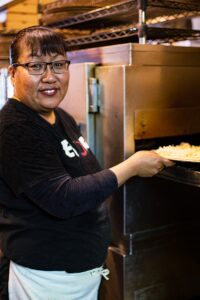 Christina: How did you discover Zachary’s?

Tsering: One of my friends was helping me.  I came here as a part of a resettlement project (Tibetan Resettlement Project of 1993). There was a guy who was helping us to find a job… He gave me the phone number of Zachary’s and I called. And I got the interview.

Christina: Who did you interview with? 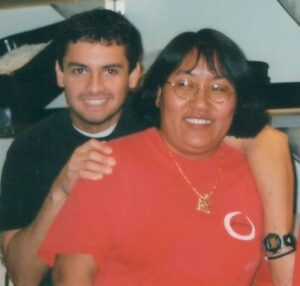 Tsering: Yeah. So, that’s how I started at Zachary’s. [Laughter]

Christina: What was the resettlement project?

Christina: Did that happen every year?

Tsering: No, that happened one time.

Christina: Were there a lot of more than 1,000 people who wanted to be in the lottery?

Tsering: Yeah, a lot of people applied, but they used a lottery. Thinley and Lodoy (two other current Zachary’s employee owners) were both in the lottery too.

Christina: Did a lot of people come to the Bay Area from Tibet or did they go all over the United States?

Tsering: All over the United States

Christina: So, we just got lucky that you landed here?

Christina: When your interviewer asked if you thought you could work in the kitchen with “all those guys” how did that feel? 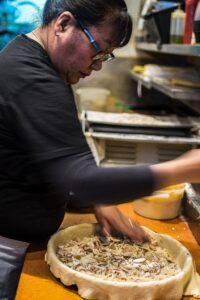 Tsering: I felt nervous. I’m the only woman with all guys! And my English was not that good. I understood (what people were saying), but speaking was a problem because we don’t speak English in India. We went to school, but it was not that good, so my English is not that good. And I was nervous! But I heard that there were two other Tibetans working, Thinley and Lodoy, so I said, okay, I’ll try. If I cannot do it, I’ll just quit. And it worked out. I’m still here.

Christina: What was it like on your first day?

Tsering: I was confident. It was okay. I thought I was going to be so nervous, but it was okay. It was not that bad. It was like housework, like dishes.

Christina: What did you think about Zachary’s when you first started?

Tsering: I liked it. The first thing I did, I came in and I was like, “This is my right place.” I felt so comfortable. I don’t know. Sometimes it just happens, right? Where you feel very easy going and comfortable? Some places you don’t like, but at Zachary’s, I felt like this was the right place to work. People were so nice. Everybody was nice to me.

Christina: How has your experience changed since you started?

Tsering: I don’t think there is a lot that is different. For me, it’s really the same. I mean, I was doing dishes for six or seven years. At that time, we didn’t hire that much so we stayed on the dishes for a long time. And I wanted to stay on the dishes because it was easier than the kitchen. I am so nervous when I do new stuff! I get nervous, so I just didn’t want to go in the kitchen. I wanted to stay on the dishes. And then they hired new people and they took me to the kitchen and I was a little nervous, but it went well. [Laughs] I was like, “Why did I get nervous? This is easy.”

Christina: How long did it take you to feel comfortable in the kitchen?

Tsering: Five or six months. You have to learn every single thing. We don’t use all of those ingredients in India. I had to learn everything from studying.

Christina: What are the ingredients here that you wouldn’t have seen in India?

Tsering: Um, most of the meats. For me, I don’t eat pork, so I didn’t know any of the pork meats – salami, pepperoni and stuff.

Christina: When you were working in 1993, did you think about being the only woman in the kitchen? Did it feel different to you?

Tsering: I didn’t even think about it. I just thought, I can do it like the guys.

Christina: Did you get any grief from people? Did people treat you differently?

Tsering: No. Because I worked hard. [Laughs] 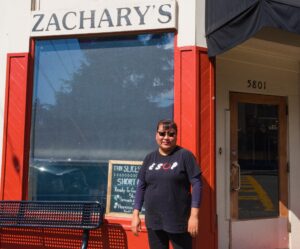 Christina: So, you don’t think Zachary’s has changed in the last 25 years?

Tsering: No, it’s not much different. Some of the menu items have changed. The people have changed, especially the dining room. The kitchen is most of the same people. Maybe that’s why I don’t feel change. I worked with the same people for 25 years.

Tsering: It feels like family now. I see my coworkers more than my family. Because they go to work and school, I see them for two or three hours, but here I see people for seven or eight hours, five days a week. They feel more like family than coworkers. [Laughs]

Christina: What do you like the most about your job? 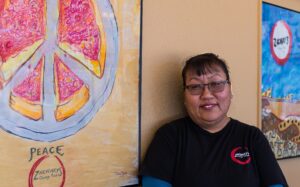 Tsering: I like to train people. If they listen, I train them. If they are showing me some attitude, I say, “Okay, if you don’t like it, then I’m not gonna bother you.” If they listen, I give them 100%. I show them how to make the pizza, the right way, and how to put the right amount of ingredients on the pizza. All the stuff. I give 100% to Zachary’s. I do my best. Before, it was Zach and Barbara. Now it’s our company. For me, it’s the same. Before it was Zach and Barbara; I had to work and they paid me. Now it’s for me. It’s like the same. So, I give 100% to Zachary’s… as much as I can.