Since 1983, Zachary’s has been making award-winning pizza in the San Francisco Bay Area. When Zachary’s founders, Zach Zachowski and Barbara Gabel decided to retire, they handed the company over to the employees via an Employee Stock Ownership Plan (ESOP). In 2010, Zachary’s became 100% employee owned.

We’re celebrating Assistant Manager Hans for January’s Employee Owner Spotlight! Hans, who originally worked in the front of the house at our San Ramon location, has seen a lot of growth in his time at Zachary’s. Not only has he moved up in the company, but he has also had a son and gotten engaged! Hans loves that work feels like extended family, and we are so lucky to have him be a part of ours. 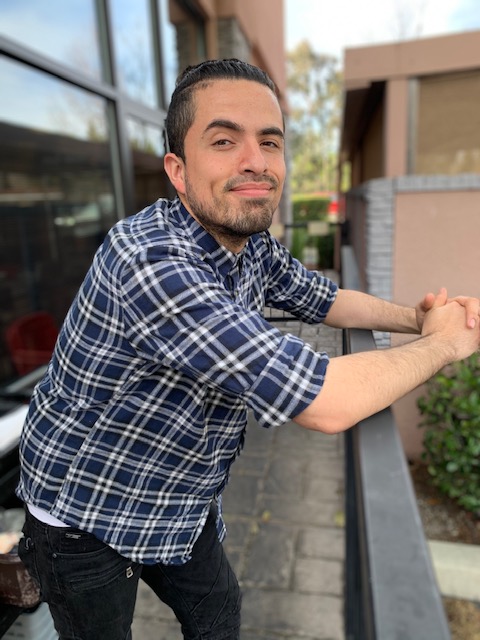 Where you can find his music: Spotify, Soundcloud and other major digital platforms under Hvns

*Hans was originally interviewed in March 2020 by Zachary’s Marketing Manager, Robin Smith. Pictures were taken pre-Covid. Robin met with Hans in January 2021 to update details of his previous interview.

R: Thanks for sitting down with me.

R: So we’re going to start with a couple of basic questions…what is your favorite pizza?

H: My favorite pizza recently changed. It used to be the Barbeque Chicken. It was very easy, add some jalapenos to it, you’re good to go. But now, honestly, I like a little Italian Tomato, put some chicken on there and a little jalapenos. Keep it light, flavorful, that’s all I like.

R: I condone this decision one hundred percent.

R: What is a favorite food of yours besides pizza?

H: Uh, unfortunately, pizza is a huge staple of my life. It was just one of those things where when I wasn’t working and I was in school it was family time so pizza was always that thing. And when I’m not working here, my son loves pizza, so always having pizza. But if I’m not having pizza you really can’t go wrong with a little pasta or a little carne asada. Yeah, keep it simple.

R: When did you join the Zachary’s team?

H: I started working for Zachary’s about six years ago.

R: What made you, six years ago, decide Zachary’s was a place you wanted to apply?

H: I’ve always had a job, but only kept it for about a year because I couldn’t find anything…after a year you kind of get tired of everything, but with Zachary’s, after applying, loved it immediately, two weeks in. I never got tired of it, there’s always something to do. I found it on Indeed, took a swing at it, got the job, interviewed by Paul and Aisha and then Leandra I guess had the last say. Right when I drove off they gave me the call and bada-bing-bada-boom, history. 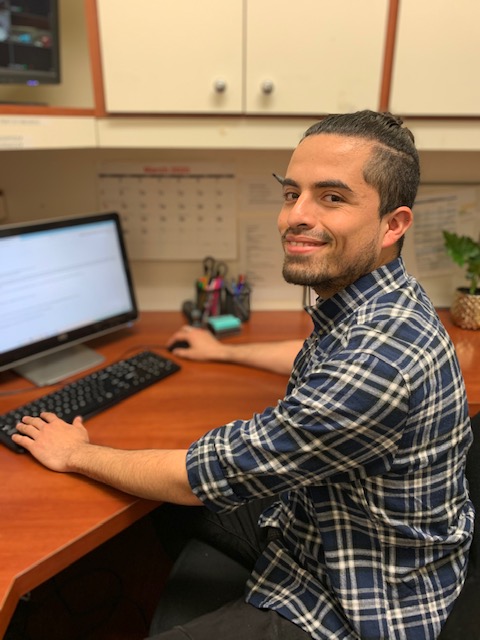 R: You’re currently an Assistant Manager at our Pleasant Hill and San Ramon locations. When did you make that jump?

H: Yeah, we’ve come up almost on two years of me being Assistant Manager. I made that transition in March of 2019.

R: So, what is one of your favorite aspects of working here?

H: My favorite, well one of my favorite aspects, because there is many, is the work ethic…that goes on behind the scenes. Everyone here, it’s very team-based, so I like that. We come in and we see where we need to pick our strengths up and we can fill it up from there. I like the fact we’re very great about, if [you’re] not good at doing something, we don’t move you on… We like to [train] you to do what you do before you move on to the next thing and that’s really cool about a job because most jobs don’t do that. They kind of take the training wheels off and they kind of send you out there.

H: Exactly…Can I have a backup answer?

H: It slowly builds up a community of…oh, ok.

R: Exactly, and it’s also personally something I love about it. Um, so I think these questions kind of blended into each other with you saying that, but what is something that keeps you engaged in the day-to-day, that keeps you motivated, wanting to grow and do better?

H: Uh, I guess that does go kind of hand-in-hand, it’s the coming in and knowing that there isn’t, how do I say this, there’s always something to do, there’s always something to learn… so what I love is that it’s very…we’re very vocal, we’re very verbally communicative. [And], I guess the crew does too! And here everyone’s in a good mood, everyone’s in a happy mood, it’s almost like an extended family. So you come in here and you want to do good for your extended family. You come in here and pick up the slack if someone needs help, you jump right in, it doesn’t feel too heavy, it feels nice to be surrounded by people working just as hard as you are.

R: I like that. So, perfect segue, what, in that regard, does employee ownership mean to you? And especially mean to you in your day-to-day?

R: What is a favorite Zachary’s memory, funny or otherwise?

H: Every memory is good, every story is good, with its own little taste to it….The happy memory is the fact that I can make memories with the people here. It’s like I said, you guys are my extended family. I love that I can come here and plan to see you guys. I love you guys enough to see you outside of work, basically.

R: Ok, so outside of work, what are some of your interests, hobbies, things that make you Hans? 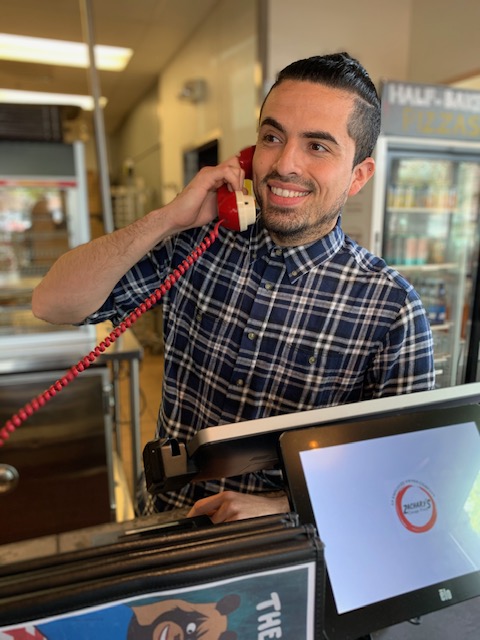 H: Uh, I enjoy my family time. I enjoy time with my son and my fiancé. I also do a little bit of music which helps me vent, helps me express some stuff that’s inside, so I like to do that. I also like to do physical stuff, so like sports. Anything sports-related, basketball, get a little physically drained as well [laughs].

R: Do you go by a special name when you do music?

H: Well, I go by my name, Hans, but it’s spelled a little bit differently, HVNS.

R: Right. And do you put stuff out for your music?

H: Yeah, I put a lot of stuff out for my music. Mostly the more professional-sounding things go out on Spotify. Soundcloud is another backup one that I put my music on. Anything I tend to put out I put out on major digital platforms and you’ll be able to find it.

R: What is something you love about the Bay Area?

H: It’s got its own vibe. Like you can’t really find the Bay Area friendliness, you know. It’s just a bunch of different societies living together, coexisting. So it’s kind of nice that even though it seems like we’re all separated somehow, we easily break that weird wall and get together and celebrate life…where we can put down our defensive walls and get together as a community…

R: Do you think that translates to Zachary’s and being a Bay business?

H: I want to say so. I mean, especially it being employee-owned, it’s one of those things where we want to set the tone, the experience for people who come from outside of California. Surprisingly, a lot of people come to try out Zachary’s [from outside the Bay], so it’s kind of nice that even [if] they can’t experience the whole Bay Area, we can show a little Bay Area in our Zachary’s. You know, a little love.

H: A little Bay love with every slice.

R: [laughs] Oh, man, that should be our new hashtag. #Baylovewitheveryslice. Do you have anything you would like to add?

H: Zachary’s is the best job I’ve ever had. I’ve only had a job for about a year because after that I get tired of it, but this is one of those jobs that everyday you come in, everyday is new, even though the agenda may be the same, everyday is different. So, it’s been six years and I’m still growing, I’m still learning stuff. Forgetting stuff [laughs] but still learning stuff. 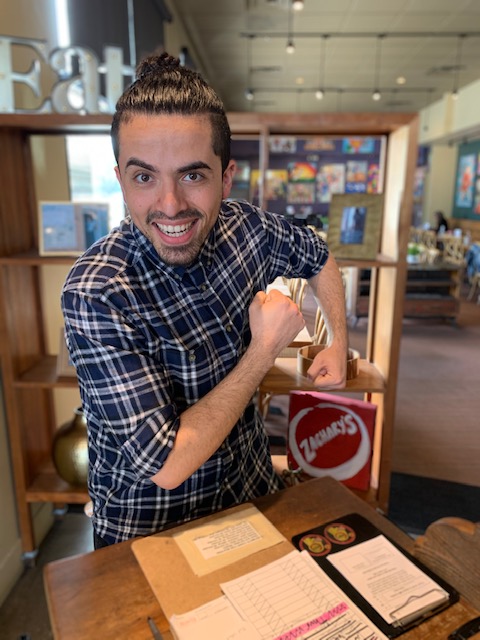 H: Life progressed outside of me being at Zachary’s. So it’s one of those things, it’s nice to grow with the company. Like, you know, it’s nice to see that my peers are acknowledging my growth. It’s nice to know that. Because, looking back, I don’t think I’ve changed, but some people told me I used to not be the best [laughs]. True story! So it’s nice to know that I grow with you guys and you’re a big part of my family and my family loves you guys and my son and fiancé feel like they’re a part of the family and you guys are very inclusive and I love the fact this job does that.

R: That makes me feel good, too. Thank you for chatting with me Hans!