The walls of our restaurants are filled with one-of-a-kind Zachary’s Pizza Art. We held our first art contest in the late 1980’s and the tradition has continued every couple of years to this day. We love our art and the artists. Ladies and Gentlemen, meet Ian Ransley. 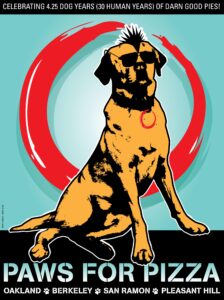 Ian Ransley is a single father of two Zachary’s-loving boys. Ian is a Berkeley native and a professional graphic designer. He splits his time designing Zachary’s posters and designing for professional sports teams and events including the NHL Winter Classic and the NFL Super Bowl among many other events. He is a dual-citizen of the U.S. and Great Britain. Growing up in a British home he never had pizza so Ian can’t get enough of it now. Ian annoys his two sons using them time and again in many of his art projects. In Ian’s past life he has swam from Alcatraz twice, finished an Ironman triathlon and parachuted out of an airplane thinking it would cure his fear of heights (it didn’t). Ian’s first job was a gas station attendant. Ian’s 15-year old son can’t believe a gas station attendant was ever a real job. You can check out some of Ian’s work and more of Zachary’s posters at http://www.berkeleygraphicdesign.com/ . 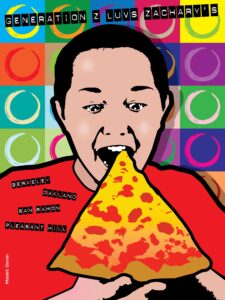 Ian is a multiple winner of Zachary’s Pizza Art Contests. Pictured here are three of his many winning pieces. Ian also designed a special celebratory logo for our 30th Anniversary. More about that here: http://www.berkeleyside.com/2013/03/13/zacharys-taps-local-talent-for-30th-anniversary/ 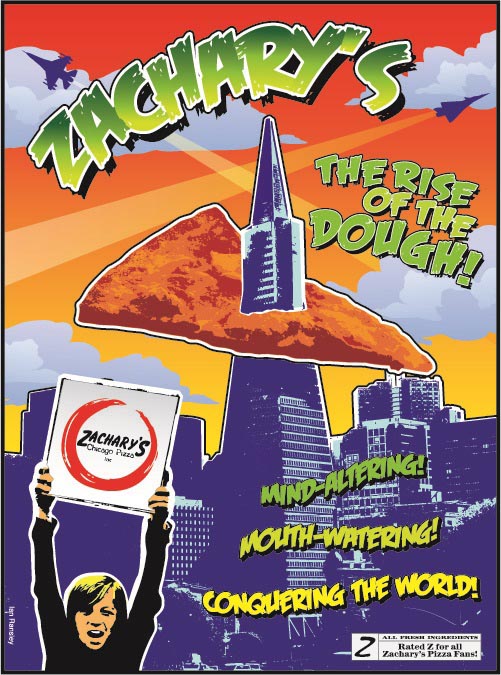