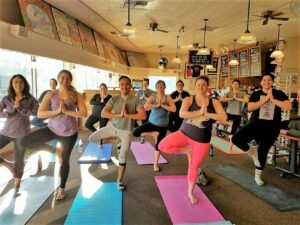 Big news! The first ever Zachary’s yoga class took place on Thursday, January 5th and it was AMAZING!

Zachary’s is an employee owned company (read more here: https://zacharys.com/about-us/our-people/) via our ESOP. We have a committee of dedicated employee owners who work to educate the crew about the ESOP itself and the benefits and responsibilities of being an employee owner. This year, the ESOP Committee decided to focus their efforts on a theme: Fit and Clean 2017. To kick off the year, Zachary’s hosted a yoga class, right here at our College Avenue location in Oakland, CA.

The fantastic and fun, Molly Pearson, agreed to lead the way. Amidst the cacophony that is an early morning at Zachary’s (think drilling, hammering, an industrial grater slicing major amounts of mozzarella, trucks delivering loads of produce, flour, pizza boxes and more, the whirring of the Hobart, the playful banter of the morning crew… you get the picture), a brave bunch of employee owners donned their yoga gear and stretched and twisted and Warriored together.

Though peaceful it was not, the morning was certainly full of beauty and joy. Yoga, pizza and some pretty fabulous employee owners made for a special start to another day at Zachary’s.