The walls of our restaurants are filled with one-of-a-kind Zachary’s Pizza Art. We held our first art contest in the late 1980′s and the tradition has continued every couple of years since. We love our art and the artists. We are excited to be able to use our blog as a medium for our community to get to know our artists better.

My name is Sophia Brown. Zachary’s is by far my favorite restaurant. I remember the first time I walked into Zachary’s at the Solano location and loved the art on the walls. It brought such happiness to my six year old face. 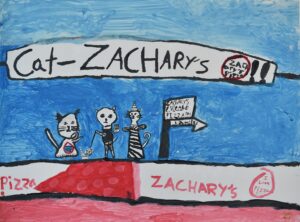 For my first painting, which was called Cat Zachary’s, we took a poster home and picked up some paints at Blick’s art store. I started thinking about ideas, and thought about my favorite animal, cats. I started sketching in pencil and all of the ideas came together, with the banner, Zachary’s two miles away, and a cardboard cat on a leash being walked by a cat that had a Zachary’s dress on. And then, while painting, my cat walked all over it, and he shed a lot, so some of his hair ended up in the final painting. 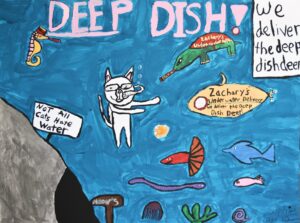 Two years later, I entered again with two paintings because I had remembered that someone else had entered and won twice. We went again to Blick’s art store and bought lots of paints. The first one that year was titled Deep Dish.  I had a small meme going through my head that I could make a pun with the deep dish pizza. This became, “We deliver the deep dish deep!” I started sketching and drew a beautiful sign that said, “Not all cats hate water”, and a cat in SCUBA gear that came out a lot better than I had imagined it. There is also a turtle delivering pizza, having come out of a yellow submarine. 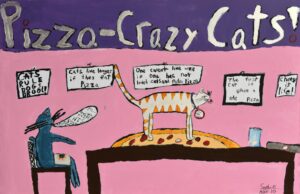 For my third poster, Pizza-Crazy Cats, which was the same year as SCUBA cat, I started off with a sketch of  cat standing on a table eating pizza. It’s supposed to represent my orange and white cat, Lazer. My other cat, Milo, is sitting down very properly. There are a series of signs over them that say: “Cats rule, dogs drool!”; “Cats live longer if they eat pizza”; “One cannot live well if one has not loved cats and eaten pizza”; “The first cat in space ate pizza”; “Cheese is Life!”

I’ve lived in the Bay Area since 2012, and was born in 2006. I used to live in Amsterdam, The Netherlands for several years, but I was born in New Hampshire in 2006. I love animals. I have eight pets including cats, fish, a snail, a bearded dragon, and mice. I’m planning to get more if my parents allow it. I’ve played the piano since I was six, and am in an advanced piano program. I’m into theater as well, and am currently performing in The Sound of Music.

Thank you so much, Zachary’s! You’ve been a big part of my life and I will always love your pizza and visit you, especially on my birthday.