Zachary’s is an ESOP. What is an ESOP, you ask? ESOP stands for Employee Stock Ownership Plan. All of Zachary’s stock is owned by the employees. ESOPs are federally governed, defined contribution plans. More info here: National Center for Employee Ownership.

When Zachary’s founders, Zach Zachowski and Barbara Gabel, decided it was time to retire, instead of selling to a third party buyer or (gasp!) dissolving our beloved restaurants, they sold the company to the employees. Little by little, the Zachary’s crew bought more and more of the company until we became officially 100% employee owned in 2010. 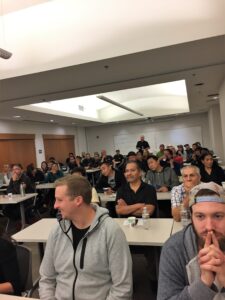 To kick off employee ownership month, we hosted our Annual ESOP Meetings. This is a chance for our whole crew to get together to learn about our business and learn about the ESOP. In the photo on the left, employee owners eagerly await the start of the meeting… and the unveiling of Zachary’s 2016 share value!